What the church does for people.

Since I left the church, the staunch and zealous opinions I held in my youth have given way to something I think is much more practical. Now I consider myself a humanist…with religious sympathies.

What does that mean? It means that I believe, in general, people are more important than the ideas that frame our existence on this planet. And that anything setup to govern people’s behavior in life should be centered on helping people live happier lives, rather than causing needless suffering in support of a principle. In short – pragmatism. Do what works. If it doesn’t work, do something that does. I understand it’s not a panacea, but it makes sense to me.

The Church of Jesus Christ of Latter-day Saints is just one of many, many religions in this world that are defined by its own set of principles and rules. I believe religions are here to help people in this life. That they are largely human creations made to respond to some very real human needs, and to give people answers to questions that nobody really has answers to. Whether or not each religion’s set of answers are true and factual is almost irrelevant. If people choose to believe and trust in a religion, it gives back to them a comfort and support that can be incredibly powerful.

Two weeks ago our family suffered an incredibly tragedy. My cousin’s son died at the age of 22 from a rare liver disorder that he suffered from birth. Before he was a year old he received a liver transplant. Eventually his health stabilized. He grew up living a normal life, though he always had to take medication and occasionally needed to spend time in a hospital when something went wrong. When he was rushed to the hospital for the last time three weeks ago he was living with cousins and planning to go to college. His younger brother was on a mission, something he could never do because of his health problems.

While his death wasn’t as unexpected as it would’ve been were he healthy, it was still absolutely devastating to those closest to him.

I went to the funeral with my brother and parents. His brother gave the life sketch. My mother sang. It was beautiful.

But what I remember most from the funeral was the talk given by the boy’s uncle, who happens to also be my cousin. He’s older (in his late 40’s now) and has almost definitely taken his tour through many church leadership positions. A man very close to the church.

Perhaps more than any other branch of the family, his was closest to the family of the boy who died. He related to the congregation that when the family asked him to speak, naturally, he felt inadequate. And of course! I mean, what do you say? How do you inspire comfort when what happened was so impossibly unfair?

After several minutes of recalling happy memories which everyone smiled and laughed at, his voice lowered and petered out, obviously heavy with emotion. He started again, and even though he was at the pulpit it was obvious he was speaking directly to the boy’s family. He spoke quietly and halting with tears saying something to the like of, “I went to the temple to ask for help with this talk…God help me say what I need to say… [speaking to the mother] I’m supposed to tell you that you are a wonderful mother and that your son is still being mothered, [to the father] you are a wonderful father, [to the brother who came home from his mission for the funeral] that you are a wonderful brother.”

My recollection of it isn’t doing the moment justice. It was much more personal and special than what I can recall.

If you’re familiar with LDS sacrament meetings there’s a magical moment that happens occasionally when something really singular, or personal is being said. The normal background hum of the congregation quiets down and a different atmosphere takes over as people pay closer attention. In the church they call it “the spirit”. At this very special moment of the funeral, probably the most important moment of the entire day, the spirit was very intense. I’m sure many would say - the veil was very thin at that moment.

I sat there listening to my cousin, in the middle of a room full of relatives and friends having a very special and spiritual experience. I was touched, but I forced myself to remain dispassionate and logical about what was happening; and given the importance of the temple amongst faithful, including the many accounts of spiritual experiences had by people there (some bordering on the supernatural), I listened very carefully for any explicit mention of some sort of ‘visitation’.

There was none. If he experienced anything like that, he left it out either because it was too sacred for him to relate, or because it didn’t happen. In either case, he left it open ended; probably for the best.

This is my point. The church did something very important for my family on that day - it comforted the living and made the loss a little more palatable. Whether or not the afterlife is as the LDS church says it is isn’t as important as helping the living cope with lost loved ones and to continue living their own lives without fear or misery.

In light of this I ask, what good is the truth if it’s as bleak and terminal as science has it? Boyd K. Packer has said, “There is much that is true that isn’t useful.” I’ve come to agree with him.

What does this mean in respect to me coming out of the closet and leaving the church? Am I going to run back to into church activity, out of the arms of my fiancé and back into the closet again? No. A thousand times, no. What is does mean is I’ve gained a renewed respect and admiration for what the church can do to help people. And if people are the most important thing, then it gives me hope for the future of gays in the LDS church.

Let’s hope either a stroke of pragmatism strikes the church leadership, or a real stroke strikes down those who stand in its way.

The soundtrack to 8: The Mormon Proposition has just been released on iTunes.
Click on the link below to listen. 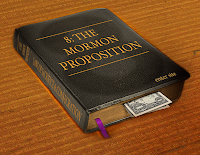 Well, ladies and gents (and those who have yet to make up their mind), it's official - 8: The Mormon Proposition has been selected to premiere at the 2010 Sundance Film Festival.
Posted by Chester at 5:05 AM 1 comment:

-I'm glad the church seemed to lessen it's stance on gays.
-I hate that I'm expected to feel grateful for their support for my rudimentary rights.
-I'm astonished that people really do think I'm out to destroy their families.
-I'm happy my family has the church and what it does for them.
-I'm sorry the church has my family and what it does to them.
-I like living in Utah.
-I hate living in Utah.
-I admit to a bit of schadenfreude towards the church. To them, it must be like living a real-life Battlestar Galactica. Wait, you're a cylon?! The whole time you were a cylon?!!
Posted by Chester at 5:53 AM No comments:

Here's the story.
Here's the best response I've read.
Thank you LDS church. I'm eagerly awaiting my Right to Breathe Oxygen Card in the mail.
Posted by Chester at 5:53 AM 3 comments:

Organizations such as the National Organization for Marriage were at the core of Prop 8 getting passed in California last year. The same organizations were also at work in Maine this year spreading unreasoned fear and bigotry, and they were successful again.
This is our second high-profile defeat in a year. What can we do? Bitch about in our blogs? Twitter our disapproval? Sigh a little deeper for the next week and then get on with our oppressed lives?
Maybe a good question is what separates our side from their side? What are they doing that we're not? It's not a matter of passion. Both sides are pretty equal when it comes to that.
The cruel fact about this fight is the other side has almost inexhaustible resources and seems poised to give everything they have to ensure victory. Tell me, how many members of the church would gladly mortgage their homes to help fund this fight if the church asked them? Probably many thousands, at least.
It's about MONEY ladies and gent's.
MONEY makes the commercial spots, buys the TV time, pays the professional signature gatherers, and feeds and waters the masses of volunteers going door to door spreading fear and uncertainty. Money pays the consultants and lawyers who help keep these organizations behind cloaks of secrecy.
What can we do?

Meet Reed Cowan. He's the director of the upcoming documentary 8: The Mormon Proposition. He has mortgaged his home in his efforts to get this important movie ready for release next year.
One of the subjects 8TMP tackles is this issue over organizations (such as NOM) formed to work against marriage equality. In this documentary, Reed reveals, conclusively, the Mormon church as THE major organizer, funder, and general puppet-master behind many of these organizations.
Why is this important? If the general populous knew it was largely the Mormon church behind the TV spots and door-to-door campaigns then it's likely they'd think twice about the propaganda these organizations are shilling.
Film making is expensive. The documentary is basically done but there are many things such as digital mastering, sound editing, animations, advertising, etc. that will help make it world-class.
His goal is to raise $50,000 by December 1st; a paltry sum in terms of movie budgets.
If you're angry and frustrated like I am and want to do something meaningful in this fight, visit Reed's blog and help fight back by donating what you can to help finish this film. Click the "ChipIn" button at the left of the screen of his blog. You can also access the donating widget directly here.
You can also visit the movie's website to learn more about the film.
Posted by Chester at 7:02 PM 3 comments: